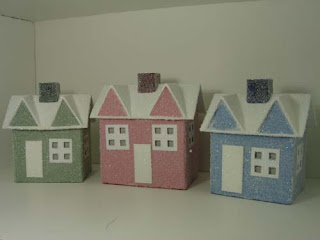 More Christmas preparations! Yes, I am a Christmas nut and this *is* a paper project. I found these houses at Hobby Lobby. I guess they're considered papier mache'. The first step was to prime them and I used Kilz. Then I painted them the colors I wanted with Folk Art paints: pastels for the living room and primary colors for the library. At first I was going to leave the window and door openings alone, but decided I'd regret that after I'd covered them with glitter, so I made some doors from chipboard coasters and glued them on. I covered the inside of the window openings with vellum card stock and made window frames from card stock (SU! Chocolate Chip for the brown ones and GP card stock for the white ones). 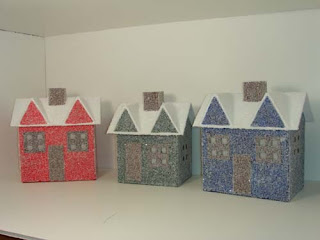 I ran them through my Xyron X sticker maker--easier than gluing each little part of the frame. I had to cut an opening in the bottom of the house so I could get my hand in to attach the vellum. At first I was going to cut a hole in the back so I could put a light in the house, but a friend suggested that might get too hot and suggested a battery operated tea light. Smack me upside the head--why didn't *I* think of that, LOL! It works like a charm--the third picture shows how they light up the vellum with the room lights on low. Then, I diluted Elmer's glue (simply because I have a lot of it sitting around, LOL) about half and half with water and brushed it on with a sponge brush, doing one side at a time. Holding the house over a large clean tote, I started sprinkling clear glitter on it, very heavily, then tapped off the excess. The first picture 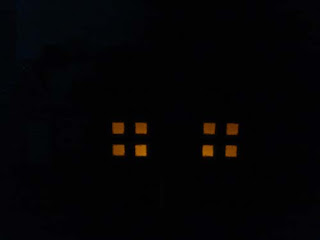 shows the pastel colored houses that will go under my Victorian Elegance tree in the living room and the primary colored ones will go under my Hallmark Traditions tree in the library. I'm going to bleach and dye some bottle brush trees to go with the pastel ones and use the dark green ones with the primary colored trees. I like 'em! Yeehaw! Another project marked off my to do list.