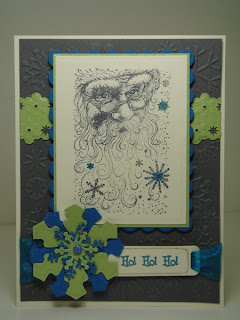 This card is for the SCS color challenge this week: Certainly Celery, Pacific Point, and Basic Gray and also for Jen del Muro's Sketch For You To Try. I chose this Santa stamp 'cause I'm really itchin' to make some Christmas cards!!

My base card is Very Vanilla with a layer of Basic Gray that I ran through my Cuttlebug with the snowflake folder. The focal image is stamped on Very Vanilla with Basic Gray ink and cut/embossed with a small rectangle Nestabilities die. It's matted with Certainly Celery and then Pacific Point that was cut/embossed with a small scalloped rectangle die. The top band is Certainly Celery and punched on both sides with a Martha Stewart snowflake border punch.

The bottom band is blue ribbon holding on a ribbon slider that was cut/embossed with a Nestabilities die as well. The accent element is made up of three sizes of snowflakes and attached with a blue glitter brad. The sentiment is stamped in Pacific Point 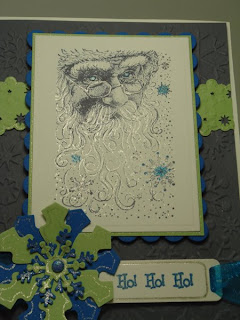 I used a lot of bling with a Sakura glitter pen on Santa's beard, the snowflakes, the sentiment, and the top band. The blue on the snowflakes and Santa's eyes was done with a Copic marker. The second picture shows a little of the glitter accent. This was a fun card to do--next time I want to do it with RED, though, LOL!! Thanks for dropping by!