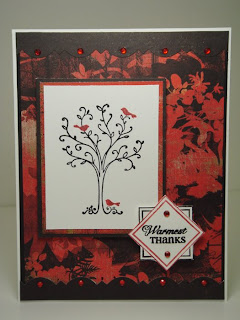 This card is for several challenges. First, the first day of Paper Craft Planet's Twelve Days Of Christmas contest in which one has to use a tree or bird on their card, then Sharon Johnson's Stamp Simply challenge where one has to give thanks, and last but not least, Julee Tilman's Mojo Monday sketch.

My base card is Whisper White. Then I added a layer of Basic Black and then a layer of Basic Grey's Scarlett's Letter DP. Following Julee's sketch, I added a border to the top and the bottom, using a Martha Stewart border punch. The focal image is an Inkadinkado stamp that I inked up with Stampin' markers in Basic Black and Ruby Red. I added some shimmer to the red birds with a Sakura red glitter pen. I matted this image on two DP from the Scarlett's Letter collection and mounted this element on dimensionals. The sentiment was stamped with the frame stamp and a sentiment stamp from Verve's Artful Elegance set in Basic Black and Ruby red. I cut it out and added some small faceted red gems to the borders and the sentiment element, which is also up on dimensionals. I think I covered all of the requirements and I kinda like it. Thanks for dropping in!