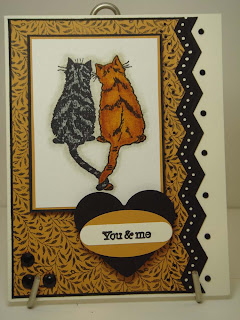 This card was going to be a Valentine's Day card for my DH since he and I are crazy about our cats. But, today he's embarking on a little adventure, so I left it for him to get after I leave for work with a little note of encouragement. He retired from teaching high school Spanish six years ago and never felt the need to sub, LOL. But, the school board office called him one day last week and asked him to fill in for three weeks for a teacher out on maternity leave. I think he's actually pretty excited about it. I also think he's in for some reality shock--a lot has changed in six years! But he's looking on it as an adventure and he'll probably have fun. I've had this stamp for some time and just got around to coloring it to match a couple of our cats, LOL.

My base card is Very Vanilla with a layer of Basic Black that was treated to a Martha Stewart border punch. The next layer is More Mustard stamped in Basic Black with a Cornish Heritage Farm Leaves #3 Backgrounder stamp on which I also used the same border punch. The focal image is an Inkadinkado stamp done in Basic Black on watercolor paper and colored with Stampin' markers and a blender pen. It's matted with More Mustard and Basic Black and is up on 3M foam squares. The sentiment is from Inkadinkado's Greetings/Salutations set and is stamped on Very Vanilla with Basic Black and punched out with the Word Window punch. It's matted with More Mustard punched with the Large Oval punch and a heart punched with a Marvy punch in Basic Black. The whole thing is up on 3M foam squares, as well. Some black faceted jewels accent the lower left corner and the punched border.

Thanks for stopping by!