A very dear friend of mine asked me to make cards for two of her grand-daughters who have birthdays coming up in April. One's a teenager who plays guitar in a rock band and this card is for her. I hope she likes it as much as I do!

I'm using SCS Sketch Challenge #219 for this card, although I had to make it square to accommodate everything I wanted to do with it. My base card is Whisper White with three layers of Scarlett's Letter DP from Basic Grey. 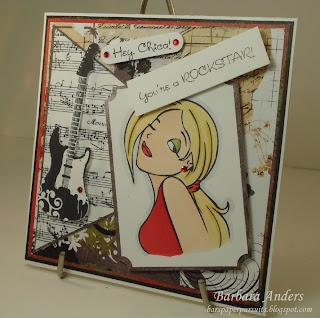 The next element, the wedge, is Whisper White, stamped with a background stamp from Stampabilities called Composer's Dream in Palette Noir Black and layered on more DP. The guitar was stamped with Palette Noir Black on Whisper White from an Inkadinkado set called, appropriately, Rock Star, and was cut out and popped up on 3M foam squares. The focal image, using MFT's "Hey Chica" set (which is apparently currently sold out--but check back if you're interested--it'll be back) was stamped on Gina K. Pure Luxury 80 lb. paper with Memento Tuxedo Black, colored with Copic markers (see below for colors used), 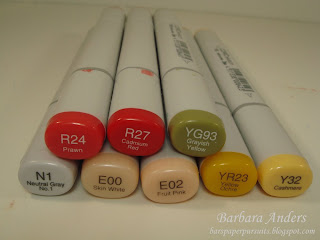 and after using my ticket corner punch on both layers, was matted with more DP and is up on foam squares. The sentiment is from the same set and was stamped on Whisper White with Palette Noir Black. The smaller part was cut out with my Word Window punch and is up on 3M foam squares and the larger part is also up on foam squares. I added some red crystal bling to the guitar and sentiment, and as an earring for Chica. I really like how this turned out and I'd love to know what you think!

Thanks for stopping by!

Email ThisBlogThis!Share to TwitterShare to FacebookShare to Pinterest
Labels: Birthday, My Favorite Things 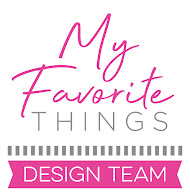