Now that we've teased and tempted you all week long, it's almost time for you to shop for your favorite Brand Spankin' New products from MFT. But first... it's time for our Die-namics Feature and Pre-Release Pep Rally! Our Design Team has been busy creating jaw-dropping and inspiring projects for you, and we've saved the best for last. We've taken an in-depth look at this month's Die-namics, while re-visiting the amazing sets being released tonight at 10 PM EST RIGHT HERE in the MFT Boutique. And while we are at it, how about we make your life even easier with a "cheat sheet" of all that's new?  Head over to the MFT Blog to print out a shopping list. Here are the details about the upcoming release on March 6th at 10 PM EST:

I’ve had this project on my mind since I first got the Die-namics Royal Rose die in my hands! I’ve got plans for this puppy and it’s now residing in my living room :) I grow a lot of roses and, if Mother Nature cooperates, I’m going to have a tea party on my front porch and a garden tour for my Red Hat chapter in May. This beauty will be the centerpiece of the food table.

It has 54 roses on it--yeah, that's a lot of roses. But you know I’d never let anything like that stand between me and a cool project ;-) To cover the ball with the fewest roses possible—and still get good coverage, I played around with making the rose look like a rose in full bloom. And now I’m going to show you how I made this topiary

My DH took some of these first pictures, where I was using both hands, so keep that in mind, LOL! I did the best I could with them ;-)

First, I cut out a bunch of roses in two colors of pink. Then I started shaping the inner most 5 or 6 “petal” sections—just rolled them over the handle of a small paint brush…

Then I proceeded to roll the rose as usual—I use a quilling tool but I have used a toothpick or a pair of pointed tweezers—we crafters are very adaptable, LOL! Do not roll really tightly—you will need your spiral to be somewhat loose or your shaping will disappear.

I swear by hot glue to assemble rolled flowers. They will NOT come apart if you do it correctly and BOY are they sturdy! OK, so the “round” area at the very center of the die cut is where I apply the hot glue—cover it totally and make sure it’s thick enough.

Then, fold the hot glue-d circle over all of the rolled rose layers and make sure they’re all included in your glue glob.

I found it good to push the outermost petals up tight to the rest of the rose at this point to maintain the shape better.

Now, the petals you rolled over the paintbrush handle will still have a little curve, but you’ll have to do more; the process of rolling flattened them out considerably. I use some angled jewelry tweezers, but I tried straight pointed tweezers and they worked—they were just a little more awkward. Anyway, I gently rolled the petals again until they had the shape I wanted. You may not be able to do more than four petals in this step but that’s OK.

And here’s your rose in full bloom!

For the topiary, I attached the roses temporarily to the ball as I worked—didn’t want to make too many, LOL!

Here they all are, in all their rosy glory!

Next step: make a hole in the Styrofoam ball for the dowel. I used an apple corer that worked perfectly. I took out about a 2” plug.

I had my DH cut my dowel about 14” long and then I covered it with ribbon, using 1/2” Scor-Tape along the entire length of the ribbon.

Next, I squirted a lot of hot glue (be sure to use Low Temp hot glue—ask me how I know) into my cored-out hole…

…put the ribbon-covered dowel in, and held it straight until the glue set up.

Almost there! Using hot glue for my adhesive, and doing it in small patches, I covered the ball with Spanish moss. Since my ball was green, I didn’t obsess about coverage.

After the Spanish moss dried a bit I attached the roses with hot glue, pushing them down so I felt comfortable that the glue had reached the ball and not just the moss. Next, I mixed up some plaster of Paris and filled my container until it was about 1” from the top. I then put the dowel end into the plaster of Paris. At this point, my DH asked me how I was going to keep it straight while it set up. Hmmm, I supposed I’d hold it for the twenty minutes or so the box said it would take. But no, he had a better idea, shown below. I think I’ll keep him :)

Here’s the finished project again. After 24 hours, I spread some Elmer’s glue on the plaster of Paris and added some more Spanish moss to cover it. I put one rose and a couple of Die-namics Upsy Daisy leaves on the moss. And, finally, tied a ribbon bow under the rose-covered ball.

Here are the Die-namics dies I used on this project: 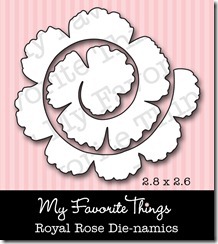 Thanks SO much for stopping by! I hope that this project will at least encourage you to think outside the box with your MFT dies and stamps! MFT Die-namics—not just for cards :)Hope to see you at the release party tonight and shopping and the New Product Tour right after!