My Favorite Things and Xyron 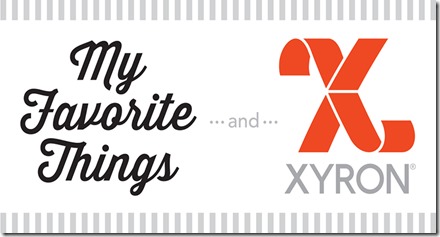 Hello, everyone, I’m so excited to be participating in this collaboration between MFT and Xyron! My project was done with the awesome help of the ezLaminator and I could NOT be happier with the way it turned out. 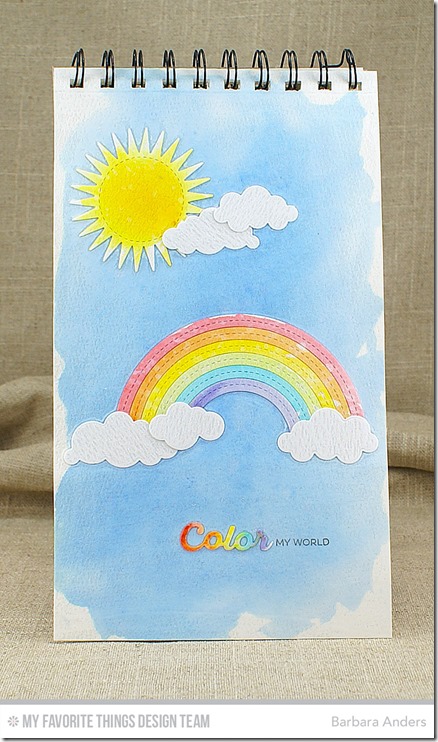 I’d had in mind to do a Peerless Watercolors swatch book for a while and I just figured I’d get some laminating pouches for it. I’m sure that would have worked but I’m also sure it would not have been as easy—or as much fun--to do compared to the ezLaminator, or turn out as professional looking. I’m going to show you exactly how I did it but I must warn you there are lots of photos so get your favorite cuppa and settle in :)

I wasn’t sure I’d use Peerless Watercolors at first—I had Zig markers, I had ink refills, I had Kuretake watercolors…did I need Peerless? The answer is a resounding YES! I found I love Peerless but before I was going to jump all in I decided to give them a thrifty trial period so I bought this portfolio on Etsy and you can tell it’s been well used. 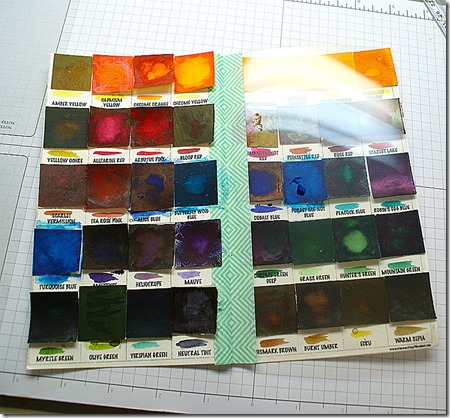 These squares are about 1” in size and I soon found out they were not large enough for the level of use they were going to get from me. You can also see that when trying to get every.last.bit of color off the swatch, I often made a mess on the base, which was watercolor paper. 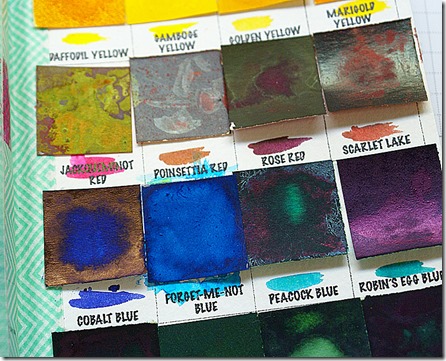 This was a great way to find out if I was going to love them or not and it also gave me some valuable information for my project. First, I found I wanted larger swatches and second, my swatches needed to be mounted on something that could be wiped clean if I overshot the swatch. Hence my thoughts to laminate.

I also knew I didn’t want to put them in a hard cover notebook or in any kind of pocket that would require removing them and putting them back. When I spied this watercolor tablet at a craft store I knew that was the way to go. It would fit in the handy space in which I kept my Etsy version and I could take it apart and use my Bind It All to make the laminated sheets work. 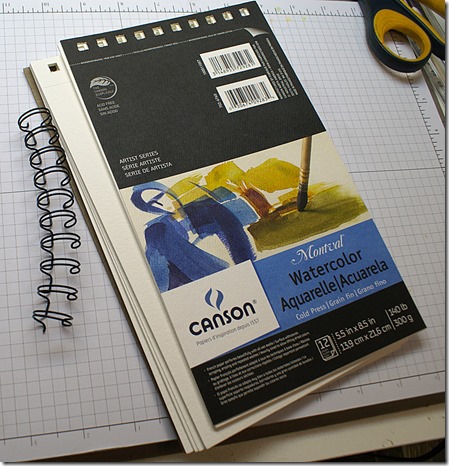 The first thing I did was draw a rough image of one of the sheets on my grid paper and figured out how many 2” square swatches I could fit on one sheet. I knew I wanted the name and a sample of the color included so I did some math and used some trial swatches to figure it out. 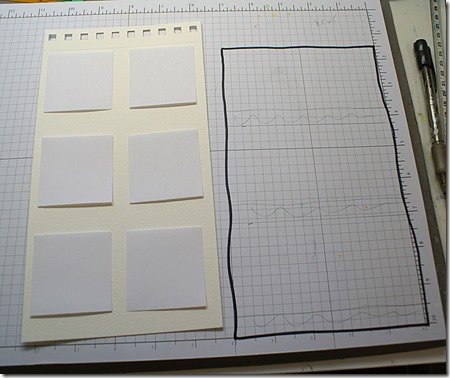 Once I had that figured out, I lined off the separate areas for 6 swatches and samples on each page. 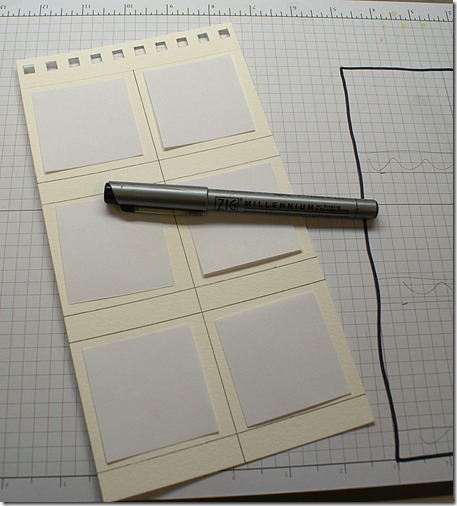 The next thing to do was get my swatches prepped. There are a few duplicates in a couple of these packs and I ended up with 61 colors. At 6 per page I’d need 10 pages—I couldn’t see laminating one color so I kept Flesh out and will add that to a page if I get more colors in the future. 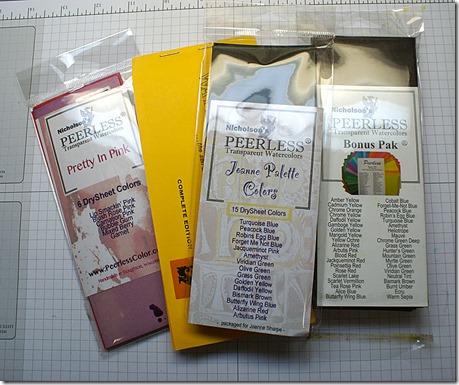 I knew from experience that color dust falls off the sheets and I didn’t want to contaminate my main paper cutter so I bought this cheapy just for this project—I think it was under $4 and well worth it to contain the dust. 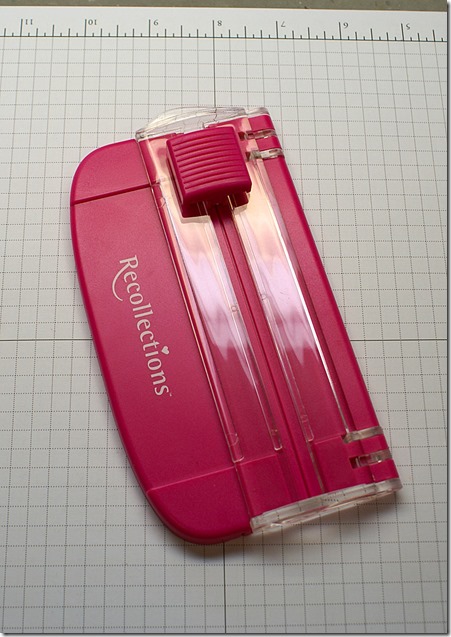 I marked my swatches with the name in two places and cut 2” square swatchs. 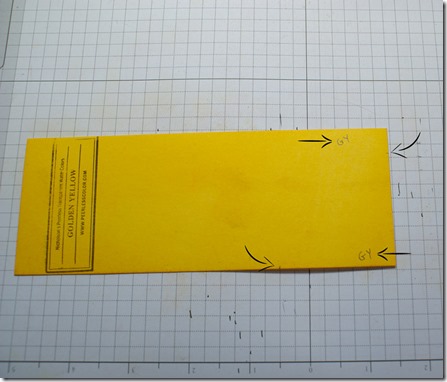 To show what I mean about the dust, I washed my little cutter when I was finished and here’s what the water looked like. The color on Peerless paper is very concentrated so a little dust in the wrong place can ruin a project. 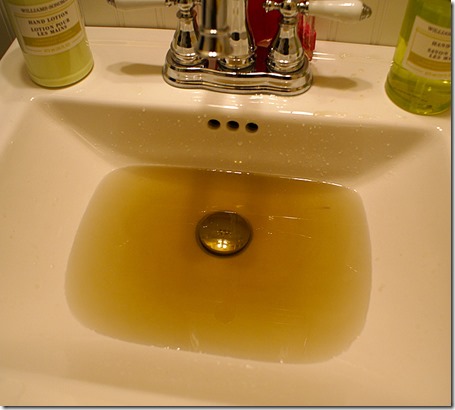 Once my swatches were all cut I set about arranging them into color families. To do this, I used a sheet I’d messed up to just do a small sample so I could see exactly what the color looked like—it’s very hard to determine that by just looking at a swatch and this was my worksheet for that. 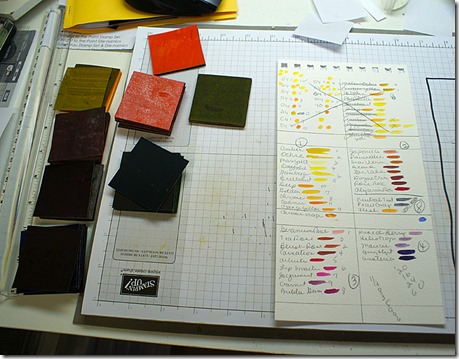 Next I typed up the color names, printed them off, and cut them in narrow strips. 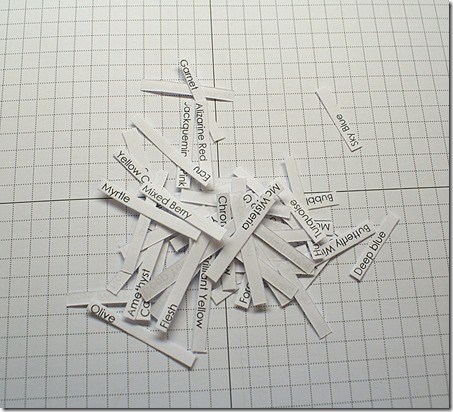 I adhered them to the swatch area and did a sample underneath it using a small water brush. 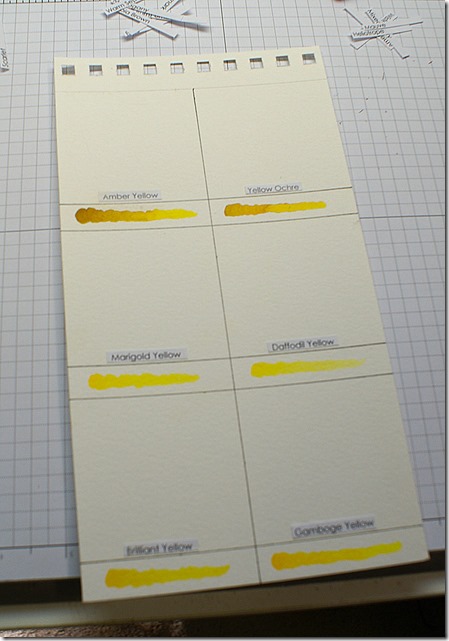 And now the fun part—laminating! I’ll show you exactly how the ezLaminator works in a bit but here’s the first sheet right out of the machine—gloriously laminated!! So smooth and neat and the name and sample are completely protected. An added bonus is you can use the back of a laminated sheet for mixing shades if you need to and simply wipe it right off!! Can you tell I’m thrilled with this? 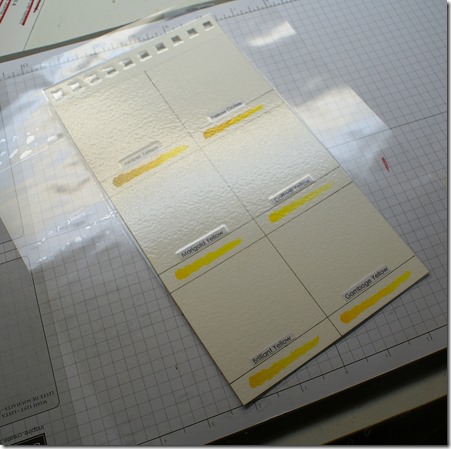 Next I did a preliminary trim of the laminate material and went about punching the holes at the top. I quickly found the holes were not exactly the same size as my Bind It All would make—luckily the spacing was perfect, though, so I trimmed off the old holes and made new ones—problem solved! 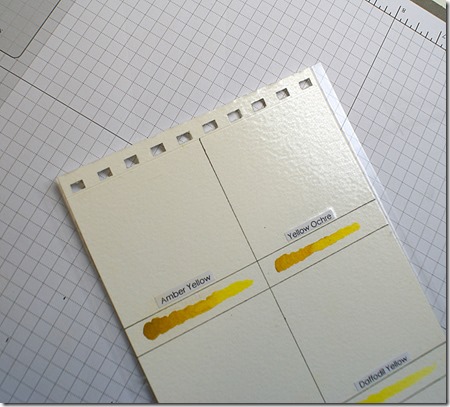 And here’s that sheet with the swatches mounted with tape runner. Once a color is used up its a simple matter to remove the spent one and add a new one. I’m not sure if you can tell or not, but I ended up trimming the laminate material right up to the watercolor paper all the way ‘round. I tested it first and believe me, it will NOT come off! 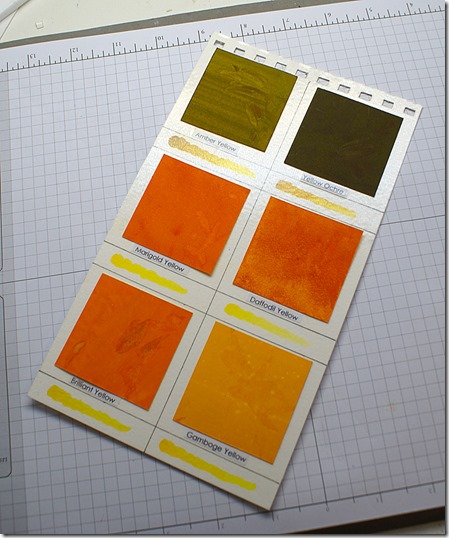 My worksheet was also my test sheet—it’s where I tested the hole punching, the actual laminating process, and the trimming-close-to-the-paper thing. 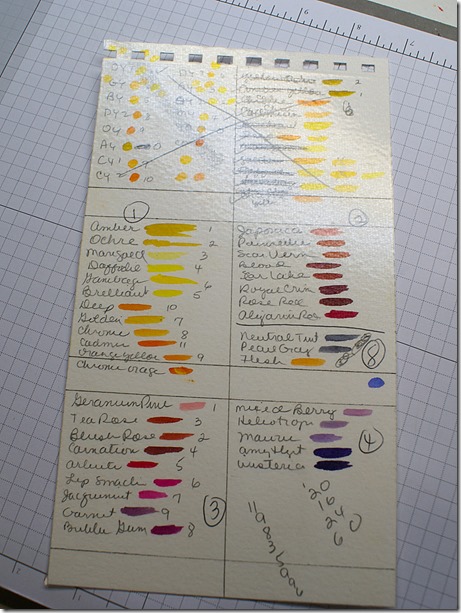 At one point I looked at it and it occured to me that having a sheet like it with small samples of color would be great to have in the front as a kind of “Table of Contents”. It would allow me to choose the color I wanted quickly without flipping through the whole book, with the inherent risk of dropping color dust. Once my color was chosen, I could go directly to that page and see the large sample. So, that’s what I did. I printed off the names again, adhered them all to one sheet and laminated it.

The laminating process with the ezLaminator is VERY simple. You place your item on the tray (which is stored in the machine when not in use), push it firmly in until you feel resistance, and crank the wheel. No electricity needed so you can use it anywhere!! 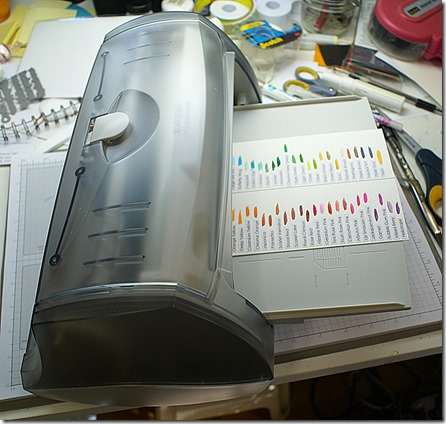 It comes out the other side and there’s a cutting blade on a track to cut the sheet off the roll. And this blade cuts like a hot knife through butter—it glides along it’s rail and right through the laminate material. Then it’s a simple matter of trimming it to suit your needs. 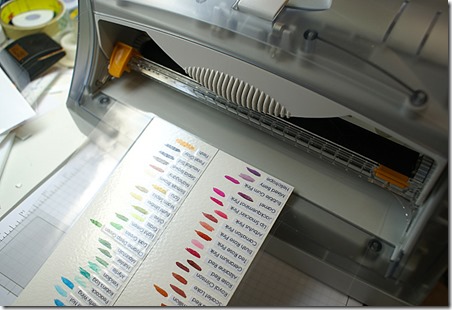 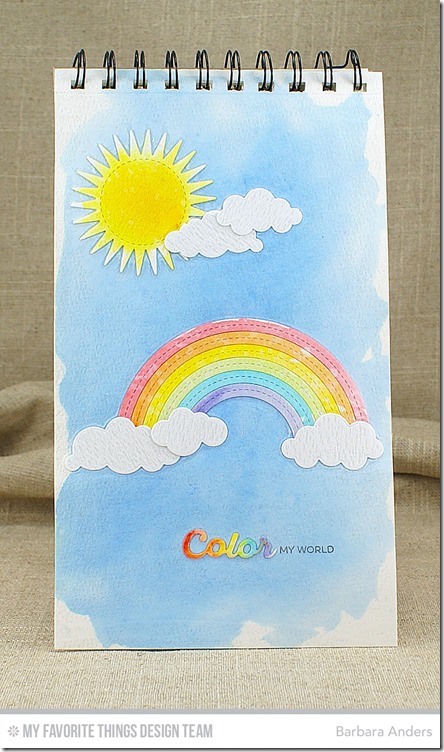 I also thought it would be nice to have index tabs on the side of the book, again to avoid too much flipping through the pages.

To do this, I cut some swatches of MFT card stock that most closely would match the general color range of each page, lightly adhered them to a piece of Watercolor Paper Pad (they need to be adhered so they don’t move as they’re introduced into the machine) and laminated the sheet. 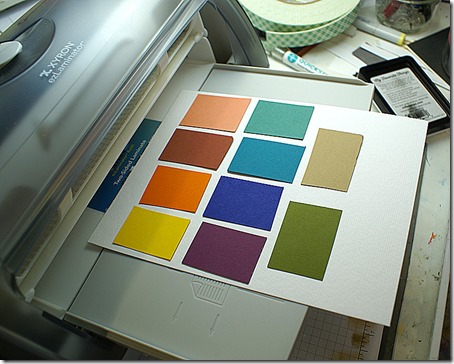 I think that red arrow means I’m getting close to running out--I’m thrilled with getting the whole project done with just the material that came loaded in the machine! 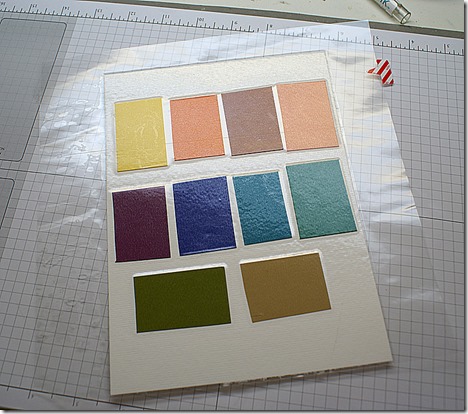 After it was laminated, I cut tabs using Blueprints 15 Die-namics. Keep in mind I have two layers of laminate material, one layer of watercolor paper, and a layer of card stock. The die cut through about 95% of the way and it was easy to use my craft knife to finish it off. 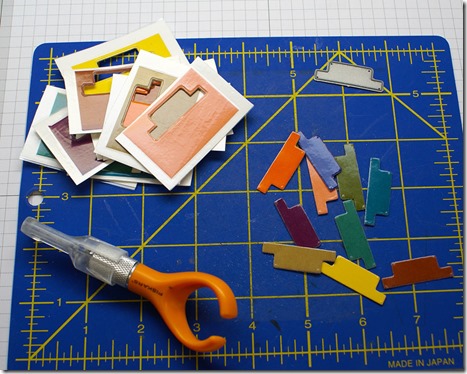 I adhered the tabs with Scotch Permanent Tacky Glue and it was DONE!! 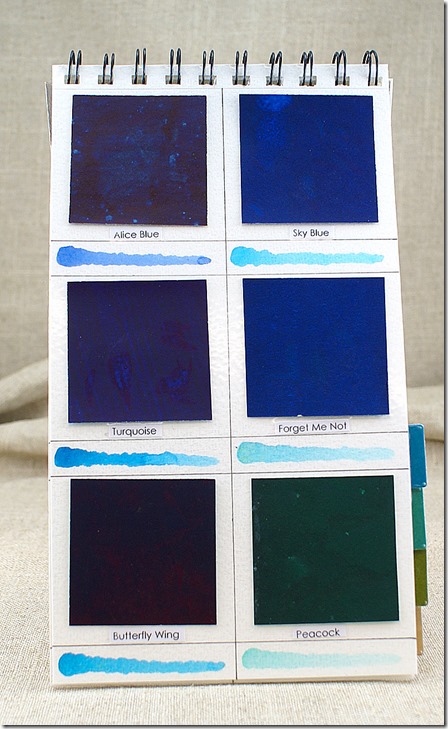 Thank you Xyron for making my Peerless Watercolors swatch book a complete success!! It took a little time to design and create but I love using it and it will last me forever so it was time well spent.

Thanks for stopping by! I hope I’ve got you thinking of some good ideas for using an ezLaminator—I already have a list…

Email ThisBlogThis!Share to TwitterShare to FacebookShare to Pinterest
Labels: My Favorite Things, Xyron